When Julius Caesar invaded Great Britain in 55 B.C., he found a country populated by that mysterious people we call the Celts. In all of the history which follows, we see these Celts being driven back by various European invaders, so that today their language survives in Wales and in the Gaelic of Scotland and Ireland. (In one of history's small ironies, the Celts of Cornwall were pushed back across the English Channel and reintroduced their Celtic language, Breton - from "Britannia" - still spoken today, into a country which had already been latinized.)

Julius Caesar invaded Great Britain ("veni, vidi, vici") but withdrew with his legions. The occupation of the country which the Romans called Britannia had to wait nearly 90 years; it took place in 43 A.D. under the Emperor Claudius and lasted until 410 A.D. when, with the western Empire on the verge of collapse, the last legions were withdrawn. This "association", lasting nearly four centuries, left surprisingly few signs either of a linguistic nature (the people continued to speak Celtic with a few Latin borrowings), or of an architectural nature (though Hadrian left his famous wall, built to protect the domesticated Celts from the Picts and Scots, their fiercer cousins to the north and west).

After the withdrawal of the legions, the British Celts, no longer accustomed to caring for their own defence, were again threatened by the Picts and Scots, and 30 years after the departure of the last of the Romans, they called for the help of the "Saxons" of northern Germany. There began an influx of Angles (from Schleswig), Saxons (from Holstein) and Jutes (from what is now Denmark); but in their turn, these new arrivals represented an even greater menace for the British Celts, who were submerged or pushed back into Wales, Cornwall, even across the Channel into Brittany. It is probable that the legend of Arthur is actually the story of a minor Celtic king fighting a losing battle against the Teutonic invaders. 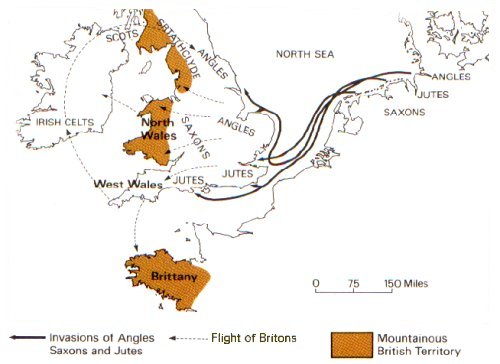 By 600 A.D., the Anglo-Saxons were beginning to think of themselves as "English" (from "Angles"). In 597, St. Augustine arrived to convert them to Christianity, which represented a latinizing influence. Augustine became the first Archbishop of Canterbury. This missionary, sent with 40 monks by Pope Gregory I, is not to be confused with St. Augustine of Hippo who lived a century earlier. [Gregory is supposed to have been motivated by having seen blond Anglo-Saxon slaves in the market in Rome; on that occasion, he is supposed to have said " not Angles but angels".]

In the Anglo-Saxon period (roughly from 450 to 1100), the Celtic language disappeared almost completely from England. The term "Anglo-Saxon", so often used in a loose or inappropriate way, therefore has a precise meaning, both historical and linguistic. Anglo-Saxon was a spoken and written language which to all intents and purposes would be unintelligible to current English speakers, even though approximately half of the vocabulary of modern English is derived from Anglo-Saxon or Scandinavian languages.

From the end of the eighth century, and above all in the second half of the ninth century (and even more specifically in the period 865-880), the country was subjected to the attentions of raiding bands of Vikings or "Danes" (in any case Scandinavians) who in the end mixed with the English and converted to Christianity, but not without having made their own significant contribution to the language. During this same period, other Vikings settled on the coast of France where they were called "Normans" (north-men); these people adopted the French language and customs and were to become extremely important in English history 200 years later.

In the whole of English history, one date stands above all others: 1066. In the 1930s, Sellar and Yeatman wrote a delightful book called "1066 and All That" which purports to portray the confused notions every Englishman retains about the history of his country. The only two dates he seems to remember are 55 B.C. and 1066.

In 1066, William Duke of Normandy ("William the Conqueror") crossed the Channel with his army, killed King Harold in the Battle of Hastings, conquered the country and installed himself as king. (This was the last successful invasion in the history of Great Britain.) For more than three centuries, no King of England would speak English, at least not as his native tongue. (Henry Bolingbroke, who reigned from 1399 till 1413, was the first truly anglophone king after the Battle of Hastings; and only from 1362 did Parliament and the courts use the English language.)

With the arrival of the Norman French, a period of linguistic dichotomy began. The nobles (William and his court, his retainers and heirs) spoke French, while the people continued to speak Anglo-Saxon-Norse (that is, the "English" of the time). This dichotomy is evident, even today, in the vocabulary of modern English. The simple everyday words, the names of barnyard animals and farming terminology (not to mention the infamous "four-letter words") tend to be of Anglo-Saxon derivation; whereas anything to do with abstract or intellectual concepts is usually derived from Latin-Greek either by way of Norman French or directly from Mediaeval Latin. So long as an animal is on the farm, it has an Anglo-Saxon name ("cow" or "ox", "calf", "swine", "sheep" - in Modern High German "Kuh", "Ochs", "Kalb", "Schwein", "Schaf"), but when it arrives on milord's platter, it assumes a French name ("beef", "veal", "pork", "mutton" - in modern French "bœuf", "veau", "porc", "mouton"). About half of modern English vocabulary derives from French or Latin.

Even William's French was not that of Paris, and with the passing of the years, Norman French became Anglo-Norman, being ever more mixed with Anglo-Saxon and more distant from French. When the nobles began to feel embarrassed at speaking decadent French, they gradually took to using English.

Naturally, in the Middle Ages the language of the Church and of the intellectual elite remained Latin. [As late as 1687, Newton wrote his "Philosophiae Naturalis Principia Mathematica" in Latin.] Still, things were changing: one of the giants of early English literature was Geoffrey Chaucer (c. 1345-1400). His "Canterbury Tales" and other works, although unmistakeably in English, are difficult for today's English-speakers to read - the language is further removed from the modern language than is the language of Dante (1265-1321) from modern Italian. The English-speaker of today usually approaches Chaucer in "translation". Chaucer was perfectly capable of writing in French or Latin (he was also a diplomat), but chose English and, in doing so, consolidated the fusion of the Anglo-Saxon-Norse line with the French-Latin line into a new modern language.

The pronunciation of the language changed significantly in the fifteenth century, after Chaucer's death. But the spelling remained in large part anchored to the past; this was partly the "fault" of William Caxton (c. 1422-c. 1491) who printed the first book in the English language in 1474 or 1475 in Bruges(!) in Flanders. If Caxton had been a true reformer and simplifier (and if he hadn't used Flemish printers!), perhaps today we would have a more logical orthography.

A discussion of the development of English literature is beyond the scope of this document. Nevertheless, it is impossible not to mention another giant, who rises above all the rest: William Shakespeare (1564-1616). This man alone was responsible for coining hundreds of words and expressions which are used every day in the modern language. Without his genius, we would all be poorer.

Richard Lederer has commented on the craziness of the English language.